As a modern feminist, I have a lot of conflicting thoughts on female empowerment and what works and what doesn’t. My personal brand of feminism is being recognized as an equal and not being seen as my gender or race. As Sheryl Sandberg said, “In the future there will be no female leaders. There will just be leaders.” I think women do have barriers to overcome, but we can’t do it alone. Men have to be on board too. This is why female only competitions and women’s groups leave a bad taste in my mouth. Love the support, hate the exclusion.

I couldn’t help feel like I was alone in these thoughts, so I decided to survey some people (112), mostly from the University of Texas, mostly women, but including conservatives as well as liberals, friends, strangers, consultants, designers, teachers and students. I had a few questions I wanted to answer:

Infographic, dataset, and code can all be found at the bottom of this article.

In general I found that people were on board with gender specific interest groups and saw them as a great place to grow and find a network, but pointed out that they tend to exclude men when the focus should be on including women in the overall workplace.

The majority of people found gender specific competitions (excluding athletics) far less favorable. 12% of respondents I ended up calling the “Yes, but” group. “Yes, I like gender specific competitions, but I think its only suitable for younger girls….but, men should be involved in the process….but, women should be involved in other coed competitions.” The feeling overall was that gender doesn’t determine skill and that everyone should compete with everyone. Some however, found them empowering.

The Three Types of Respondents

I ran a k-means cluster analysis to find out if certain clusters existed within the 112 respondents I surveyed. One segment was very distinct, while the other two were more overlapping. 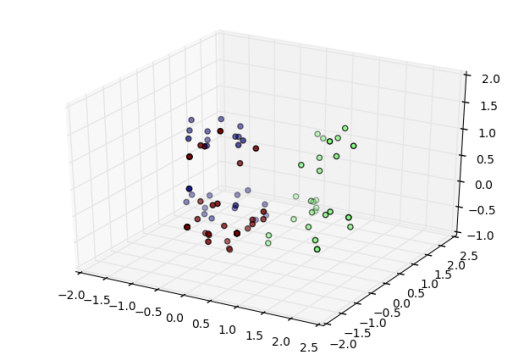 They exist in what I identify as: Better Together, Students and Safe Spacers.

Given the small sample size and similarity of respondents, the main areas of segmentation arise from differences in opinions.

Better Together: This group is the largest cluster, with 50 respondents, 84% of which are female and the most diverse among the clusters in terms of age and education. Of this group, no one favored gender or race specific competitions and had the largest percentage of any cluster against gender specific(14%) and race specific(12%) groups. From this opinion, respondents say that gender specific groups are supportive, but can be self-segregating and that the focus should be on including women, not excluding men.

The Elephant in the Room

I realized when I reached my response goal that I live in a very liberal bubble, and I needed to reach outside of my network to get more diverse opinions. Although I don’t ask for anyone’s political affiliation, I do know which responses are most likely to be conservative. What I found was that across views, opinions on gender and race specific groups don’t change much. What does is the reasoning behind it. On the more liberal side, people dislike secluded groups and competitions because the best way to achieve equality is to have everyone compete with one another. For more conservative viewpoints, they think that women are already empowered and that race isn’t an issue. And having these groups further perpetuates the differences between genders and different races. What I learned from this survey politically is that we are living in very different societies in how we perceive equality, but I also learned that the best thing we can do is talk to one another about our experiences and how we feel.

And if you didn’t get it by now, elephants represent the GOP party…

What do we do now?

I asked everyone what they thought empowerment meant and ways it could be improved. Because I’m a big fan of sharing great ideas, I am listing all of the themes I saw. I think the big take away is that empowerment of women is not just a woman’s problem. Its something that everyone needs to work on and the best way we can do that is to talk about it in the open, not just among women.

*represents recommendations for schools as well as workplaces